Watch a hilariously funny T20 cricket match between two unusual teams. Whether you love cricket or not, you’ll love this short comedy film. Please spread the word about this movie by sharing it with your friends.

This film is part of the Jadui Pankh (Magic Feather) series of 7 films made a few months ago. The entire cast was first trained in theatre and then roles were assigned on the basis of acting potential. A few members of the cast including Vijay (Ranjit) stay at the Mumbai Central railway station. The inspiration for this film came from the importance of the game of cricket in the lives of these children. Perhaps the day to day struggle of life seems a little more bearable when you have something to look forward to?

To watch more films from the collection visit the Jadui Pankh page.

Do you believe in ghosts? Have you ever been to a haunted house? Watch this delightfully funny short film about a haunted house in old Mumbai and let us know if you change your mind.

Warning: No ghosts were killed in the making of this movie.

This film is from our Jadui Pankh (Magic Feather) collection of short movies. To know more and watch other movies from Magic Feather follow this link>>. 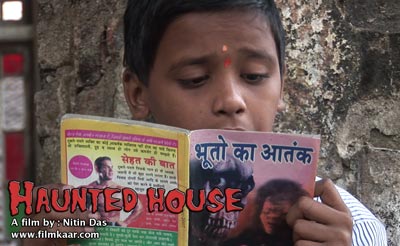 Copyright: http://www.filmkaar.com
Take a small lesson in ‘How to Make Movies‘